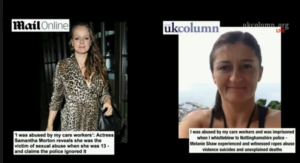 A Silent Vigil for Melanie Shaw, a vulnerable abuse victim and vital abuse whistleblower, remains in high security prison HMP Peterborough, with no substantive evidence against her, no proper NHS medication that she has taken daily over many years, no treatment for her leg ulcer, no access her psychiatrist, no visits from her family, interference with her mail, bullying from prison warders, a national mainstream media black out and a stunning silence from her MP Chris Leslie and other MPs.

Melanie Shaw, who is still innocent at law and maintains her innocence, has now been imprisoned for 61 days.
The Crown Prosecution Service under Alison Saunders has not only failed to produce evidence against Melanie, but has recently allowed child abuse witness evidence tapes to be stolen from unsecured private addresses of film contractor Swan Films.

The vicious treatment of Melanie Shaw by Nottinghamshire Police, the CPS, the Courts and the Westminster MP’s can only be explained as their sheer desperation to silence Melanie and her testimony of child abuse, rapes, torture and murder at Beechwood Children’s Home Nottinghamshire, and her evidenced discovery of Nottinghamshire police lying to hide their failure to investigate Beechwood abuses via Operation Daybreak.