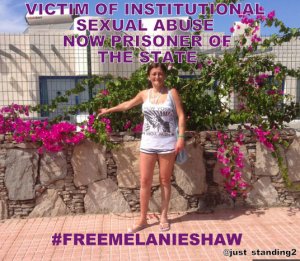 Melanie Shaw, a vulnerable abuse victim and vital abuse whistleblower, remains in high security prison HMP Peterborough, with no substantive evidence against her, no proper NHS medication that she has taken daily over many years, no treatment for her leg ulcer, no access her psychiatrist, no visits from her family, interference with her mail, bullying from prison warders, a national mainstream media black out and a stunning silence from her MP Chris Leslie and other MPs.

On 11 July 2014 Melanie Shaw, a survivor of abuse at Beechwood Childrens Home, Nottingham, was arrested on charges of arson of a neighbour’s shed, a charge that she denies. Nottingham police initially refused to say she had been arrested, and only admitted she was held in custody after numerous calls from the public who were concerned at her disappearance. Police police later seemed confused over the date of the alleged arson offence, publicly quoting both 1 February and 4 April 2014.

At a hearing at Nottingham Crown Court on 25 July the prosecution failed to present evidence, despite the Judge prompting them with references to a finger or palm print.

In what was described as a fumbling statement to the Judge, the prosecution excused the lack of evidence and promised it would be available ‘shortly.’ Despite the absence of evidence against her, her status as a vulnerable abuse victim and her importance as a key witness to widespread child abuse, the Judge was happy to place Melanie on remand, at a prison in which she has already suffered bullying, strip searches, denial of her NHS medication and disorientation through repeated relocation between cells.

Her defence team failed to communicate with her and failed to challenge the lack of evidence. At no point was Melanie asked to speak in her own defence.

Melanie had stated just prior to her arrest, that Nottingham police had failed to properly investigate both the widespread child abuse, and the deaths of numerous children within the ‘care’ of Nottingham City and County Council at Beechwood and other homes.

Note that Nottinghamshire police have used arson charges before to smear a witness’ name.

There were several flaws in the legal process, but she is remanded in a prison, Peterborough, where bullying is rife. She says she is not being given her Valium. If so, this is of grave concern, as it will at best cause discomfort, and at worst cause seizures which could be fatal.

Melanie was told to expect a “direction hearing” on 12th Sepember. She prepared for it, but was then told that it was cancelled because the judge was on holiday. She has discharged her legal team for incompetence.

Campaigners should get a legal opinion on whether a writ of Habeas Corpus should be issued for Melanie.

22nd September 2014: Melanie was on hunger strike, though this is reported to have stopped shortly after.

Here are sample letters to Melanie and the Director of HMP Peterborough.

Copy them, but then customise them. Remember to be scrupulously polite to the Director

I am so sorry to read on the internet about your case. Be assured that there are a lot of people out here who know about you, and are rooting for you. There is a petition on the Web calling for your release.

As a retired doctor and Chair of Battle Against Tranquillisers I am concerned to read that you are not getting your regular dose of Valium. This must be making you feel awful. I will be writing to the Governor of HMP Peterborough to ask him to restore your dose, and to make sure that you are treated as the important and well-known person that you now are.

Remember – you will be released, you will have freedom again, and in the end, you will get justice. It will take time. Just be patient and always remember this bad time will pass.

I enclose a book of 6 first class stamps.

With my very best wishes

In common with an increasing number of people I am aware of this lady’s status as an important witness to historic abuse in a Childrens Home. I am very concerned for here welfare, and am writing to make sure that she is not harmed in any way while on remand in HMP Peterborough.

As a retired doctor and Chair of Battle Against Tranquillisers (www.bataid.org) I am concerned to read that Melanie is not getting her regular dose of Valium. At best, this may be making her feel extremely anxious and ill. At worst, it puts her at risk of seizures, which carry a risk of death. I would respectfully ask you therefore to instruct the prison medical services to restore Melanie to her previous dose, and if it is decided to reduce it, to do so very gradually indeed, in line with current practice guidelines. Thank you.

Please also ensure that Melanie is not bullied or abused. As a survivor of past abuse in her childhood, she will be very vulnerable emotionally and physically to any threat of this kind.

Thank you for giving attention to Melanie’s case.