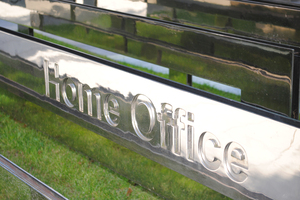 With permission, Mr Speaker, I would like to make a statement on the independent panel inquiry into child abuse, which has been established to consider whether institutions in England and Wales have taken seriously their duty of care to protect children from sexual abuse.

The House will remember that in July, I made a statement in which I announced my intention to establish the panel inquiry. I did so because of the growing evidence of organised child sexual abuse, conducted over many years, and serious allegations about the failure of some of our most important institutions to protect children from this disgusting crime.

I established a panel inquiry because it is the best way of making sure that the inquiry is conducted by a team of experts with empathy and sensitivity to the feelings of the survivors of child abuse. The fact that it is a panel consisting of several people means it has within it more expertise than any one person could offer. And importantly, the public can have extra confidence in the integrity of its work, because no one individual can take important decisions or come to judgements alone.

The members of the panel – Sharon Evans, Ivor Frank, Dame Moira Gibb, Barbara Hearn, Professor Jenny Pearce, Dru Sharpling, Professor Terence Stephenson and Graham Wilmer – are in place, and they are supported by Ben Emmerson QC, who is counsel to the inquiry, and Professor Alexis Jay, who is the panel’s expert adviser. The panel therefore consists of members with a broad range of experience and skills. They have backgrounds in social care, academia, law enforcement, healthcare, the media and the voluntary sector and some have experienced sexual abuse themselves as children. I believe that the panel can command the confidence of the public and, most importantly, of the survivors of child abuse.

The House will know, however, that on Friday, the panel’s chairman, Fiona Woolf, announced her intention to resign. She did so because, as she wrote in her letter to me, “it has become clear that the inquiry,” if she continued to chair it, “would not have the widespread victim support it so desperately deserves and needs.”

Mr Speaker, Fiona Woolf’s resignation of course follows the resignation of the panel’s first chairman, the noble and learned Lady, Baroness Butler-Sloss. Both women, I do believe, had strong credentials to chair the inquiry.

Baroness Butler-Sloss was the first female Lord Justice of Appeal, she was the President of the Family Division of the High Court, and she chaired the Cleveland child abuse inquiry. Fiona Woolf is a leading lawyer and a former President of the Law Society. But for different – and in the end, understandable – reasons, both Baroness Butler-Sloss and Fiona Woolf concluded that they did not command the confidence of survivors.

Almost four months after I announced my intention to establish a panel inquiry, it is obviously very disappointing that that we do not yet have a panel chairman and for that I want to tell survivors that I am sorry.

To put it bluntly, Mr Speaker, it will not be straightforward to find a chairman who has both the expertise to do this hugely important work and has had no contact at all with an institution or an individual about whom people have concerns. I still believe, however, it is possible to find somebody who is suitably qualified and can win the confidence of survivors, so I want to turn now to what I plan to do to recruit a new chairman.

I myself will hold meetings with representatives of the survivors of child abuse, starting next week. I have already had a number of discussions with the Members of Parliament who have campaigned for an inquiry into child abuse – the Hon Members for Birmingham Yardley, Brighton Pavilion, East Worthing and Shoreham, Richmond Park, Rochdale, Wells, and West Bromwich East – and I will continue to have discussions with them. I will also discuss the appointment of the new panel chairman with the Shadow Home Secretary and the Rt Hon Member for Leicester East. And I have already agreed with the Rt Hon Member for Leicester East that the nominated panel chairman will attend a pre-confirmation hearing before the Home Affairs Select Committee.

In the meantime, the panel will go about its important work. So I can tell the House that the panel will hold its first meeting on Wednesday, 12 November, and will meet every Wednesday thereafter until Christmas. The panel will organise other meetings that will discuss the different themes and issues covered by the inquiry and attendance for these meetings – for both panel members and expert witnesses – will be set accordingly.

One matter that I know has been raised by some campaigners is whether the inquiry should become a statutory inquiry. The inquiry as it is constituted at present – like the inquiries into Hillsborough and the murder of Daniel Morgan – is a non-statutory inquiry. I have already said that the panel will have access to all government papers, reviews and reports it requests, and subject to the constraints imposed by any criminal investigations, it will be free to call witnesses from any organisation it deems appropriate. But, as I said to the House in July, I want to make it clear that – if the panel chairman deems it necessary – the Government is prepared to convert it into a full statutory inquiry in line with the Inquiries Act.

Likewise, I do not propose to extend the terms of reference to include Northern Ireland, Scotland or the Crown Dependencies. I will, however, discuss with the new panel chairman how we can make sure that the Hart Inquiry in Northern Ireland and the Oldham Inquiry in Jersey feed in to the panel to make sure that no information – and no institutions or individuals with a case to answer – can fall through the cracks.

I can also tell the House that the Government is considering ways of trying to make the experience of giving evidence less traumatic for survivors. The panel will therefore take evidence not just in public and private meetings but also remotely, with witnesses able to speak to panel members from their homes. The Secretariat to the Inquiry is also in discussions with officials in the Department of Health and other organisations to make sure that counselling and support is available to survivors before and after they provide evidence to the inquiry.

And to make sure there is an open channel of communication between survivors, the panel and the Government, I will establish a survivor liaison group which will meet on a regular basis as long as the inquiry continues.

I know that some Members of the House have suggested that the Government should publish today the Wanless report about the Home Office Permanent Secretary’s investigation into the so-called Dickens Dossier. I can tell the House that the Wanless report will be published next week. This is because it is about a separate but related matter to the work of the panel inquiry, and I want members of the public and the media to have time to scrutinise both this statement and the Wanless review properly.

Mr Speaker, in the midst of debate about names, structures and legal powers, we must always keep in mind the survivors of child abuse themselves. Because let us remember the events that prompted me to announce this historic inquiry into child abuse in the first place.

There was the systematic abuse of vulnerable young girls in Derby, Rochdale, Oxford, and other towns and cities across the country. Examples of celebrities abusing minors and getting away with it, apparently because of their fame. And evidence that some of the most important institutions in the country – from the BBC to the NHS – failed in their duty of care towards children.

Since I made my statement in July, the evidence has only mounted. We have seen the Alexis Jay report into abuse in Rotherham and the report by the Hon Member for Stockport which was commissioned by Tony Lloyd, the police and crime commissioner for Greater Manchester. Both reports exposed serious failings among the police, social services, schools and other institutions. And the obvious conclusion is that if only we’d learned from these appalling cases earlier, there would be fewer victims of abuse today.

I believe the whole House will agree with me that we owe it to the survivors in all these cases to work together, to let the panel inquiry do its job as quickly as possible, and to start to learn the lessons of the many cases where undoubtedly too many things went horribly wrong.

I want to end my statement by issuing a direct message to the many survivors of child abuse and their representatives. I know you have experienced terrible things. I know we cannot imagine what that must be like. And I know – perhaps because of the identity of your abusers or the way you were treated when you needed help – many of you have lost trust in the authorities. I know some of you have questioned the legitimacy of this process. I know you are disappointed that the panel has no chairman. I understand that. I am listening.

And to you, I say this. I am as determined as you are to get to the truth. That is why I set up this inquiry. We have a-once-in-a-generation opportunity to do something that is hugely important. Together, we can expose what has gone wrong in the past. We can prevent it going wrong in the future. We can make sure people who thought they were beyond the reach of the law face justice. We can do everything possible to save vulnerable young children from the appalling abuse that you suffered and endured. Let us come together to make this process work and finally deliver justice for what you – and too many others – have suffered.