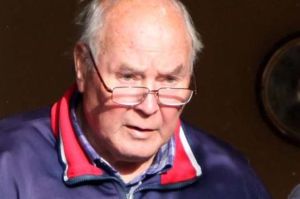 Lewis Nainby was told to leave a junior football club in Newcastle, where he worked as a coach, after two boys reported being abused during a trip in the mid-1980s

A sports coach who abused children continued working at a school – despite admitting his attraction to young boys.

Self-confessed paedophile Lewis Nainby was told to leave a local junior football club, where he worked as a coach, after two boys reported being abused during a trip in the mid-1980s.

Newcastle Crown Court heard Nianby, who was a sports coach at Seaton Burn High, Newcastle, then referred himself to a psychiatrist for help.

He admitted the assaults which took place in the 1980s, reports the Newcastle Chronicle.

During the trip, Nainby had awoken a teenage boy while touching his genitals, a Judge was told.

The boy gathered his belongings and ran from the room reporting the incident to a member of club staff.

After the trip, parents were informed and Nainby was asked to leave the club.

However, despite parents and Seaton Burn High being aware ofallegations facing Nainby at the time, no criminal complaint was made.

After retiring, Nainby worked as a volunteer football coach and exam invigilator on a casual basis at the school.

A spokesman for Seaton Burn College said: “On the day the allegations were made he was immediately suspended by school principal Alison Shaw and he has not been in the school since or had any contact with the pupils.”

He pleaded guilty to four counts of sexual assault in Newcastle Crown Court.

Nainby, of Southward, Seaton Sluice, had abused two boys on a number of occasions asking them if they would like to sit on his knee and drive his car.

Sue Hirst, prosecuting, told the court Nainby’s victims waited almost 30 years to speak out about their concerns after they learned he was still coaching youngsters in May 2013.

Katherine Dunn, representing Nainby, told the court he had not reoffended since his psychiatric treatment in 1985 and had dedicated his life to charity work, working with a hospice in the North East.

Judge Deborah Sherwin, passing sentence, said: “You had been seen in the showers wrapped in a towel but it’s not clear to me whether any adults were made aware at that stage of your actions.

“We’ve seen reference to your medical records, in October 1985 you sought help and we were also told you have told those about you of the allegations, and stopped being a football coach at the time but you continued to be employed by the school until your retirement.”

Nainby was handed a two year jail sentence, suspended for 18 months, and ordered to sign the sex offenders register.

He will also have to take part in the sex offenders treatment programme.