ONE of Britain’s most notorious child murderers was last night sensationally linked to a paedophile ring run by politicians in the 1970s.

A former cellmate of Jebson’s said the pervert boasted of his role in delivering children to be “auctioned” for abuse by high-ranking officials.

Jebson, now 75, has spent the last 40 years in jail. He was convicted in 1974 of killing a friend’s eight-year-old daughter and in 2000 confessed to strangling Susan Blatchford, 11, and her pal Gary Hanlon, 12, in 1970. Their deaths – for years one of Britain’s most notorious unsolved cases – became known as the Babes In The Wood case after he left their bodies huddled together in woodland.

The cellmate – known as “Billy” to protect his anonymity – said he is speaking out now due to constant denials of a cover up over a Westminster paedophile ring.

He said he was deliberately placed in the next cell to Jebson on C-Wing in HMP Frankland, near Durham, about 15 years ago, to extract further information about his past.

Billy explained: “I was encouraged to get Jebson to talk about his past in return for favours and protection.

“We got to know each other quite well, and chatted when our cell doors were open. One day, I was being pressed by a screw to get him to talk. He hid around the corner to listen whilst I leant on the doorframe.

“I couldn’t believe it when Ronnie started blabbing. He said he worked for a luxury limousine company on the south side of London. He said it was linked to the Westminster set, and claimed they had all sorts of posh cars, including Rolls Royces.

“He said the clients were all well-to-do, prominent people, including politicians, but said they were also paedophiles. Ronnie said many of the victims came from poor backgrounds.

“He said he often collected the children on a Friday and would take them to a large property in Surrey, to London addresses, or to a large house in the country owned by a Lord. 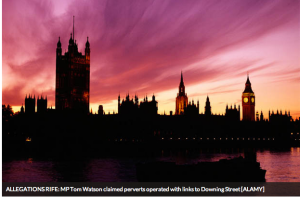 “He would have to collect the kids again and take them back for Monday. He said the parents knew what was happening and were paid huge sums of money.

“One time he said he went to a ‘big do’ where there were many other chauffeurs downstairs in the kitchen. They were getting something to eat and drink and were told to enjoy themselves.

“He said there were some very influential people there, and although they were told to stay downstairs, he says he was curious and went to have a look. He said it was incredible. All the children were stark naked and only partially covered by small bibs or aprons, and were being auctioned off.”

Billy, who said Jebson’s driving career was in 1973/74, has been out of jail for more than 10 years, but remains worried about possible reprisals for speaking out. 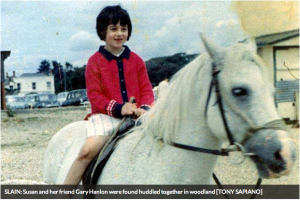 Evil Jebson – once described by a judge as a “fixated, sadistic paedophile” – was sent to borstal at 15 after indecently assaulting a girl of four, and was jailed for two years in 1968 for abusing a six-year-old girl.

He was released in March 1970 but just 29 days later lured Susan and Gary to their deaths near Epping Forest. Four days after the murders, he abused a boy of six, but was caught and sentenced to five years, only to be freed in 1973.

The then raped and killed eight-year-old Rosemary Papper in June 1974 when he was living with her family. He had been at school with her father Robert, but fell out with his old friend and attacked Rosemary in a warped act of revenge after telling her parents: “I will do something you’ll regret.”

Police have spend the past two years probing allegations of a paedophile ring operating in Westminster in the 1970s and 1980s, and involving MPs and other senior public officials.

Operations Fernbridge and Fairbank were launched after Labour MP Tom Watson claimed perverts had operated with links to Downing Street.

And it emerged last week officers had broadened their probe to include possible murders of children as well as sex abuse.