More than 1,000 alleged paedophiles have been arrested in Britain in the past 12 months thanks to new high-tech cyber tracking methods, The Mail on Sunday can reveal.

The wave of arrests is unprecedented – more than five times the 2012-13 figure of 192 – and shows how remote access to abusers’ use of the internet by silent automated search ‘bots’ appears to be turning the war against internet paedophilia.

Over the same period, more than 1,300 children at risk of abuse have been ‘rescued’ through the same methods, and given police protection or placed in care – another huge increase on the 569 total from the previous year. 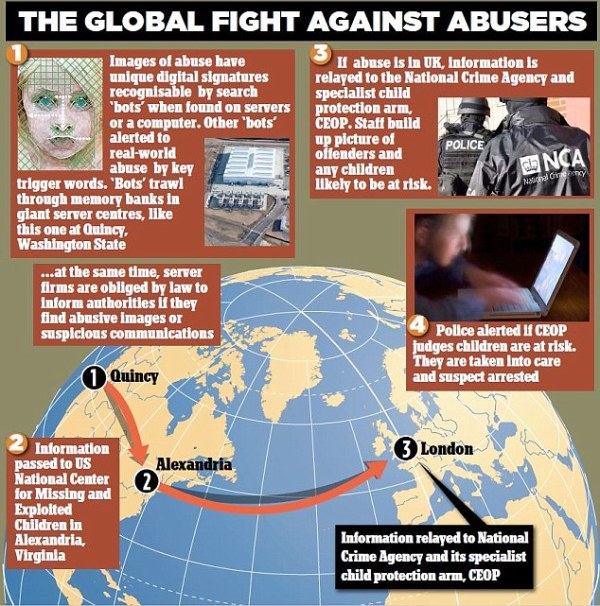 This graphic shows the fight against paedophiles is global – with agencies in the U.S. and Britain working togetherThis newspaper was last week given exclusive access to CEOP, the body formerly known as the Child Exploitation and Online Protection Centre, which since October last year has come under the command of the National Crime Agency (NCA). The figures above relate its own operations and do not include arrests made by local police forces.

CEOP’s director Johnny Gwynne said the key to success is the use of clues in abusive images harvested from the internet to mount investigations into the perpetrators of real-world ‘contact abuse’ of children.

He said: ‘We are dealing with the real world, but it just so happens that the evidence for almost all our investigations starts in the digital world. When we see images of children being abused, we are always looking for the real victim and the real perpetrator.’

Mr Gwynne, a former senior police officer in Scotland, added that when someone was found to have shared or downloaded images that indicated a sexual interest in children, that ‘is a strong indicator that you have a predisposition that represents a risk’.

Explaining CEOP’s role in safeguarding possible victims, he said officers establish whether a person with such interests has children of their own, or is in frequent contact with them.

A grandfather, found to have been abusing his grandson, was among those caught using CEOP information

‘If you’re arrested for possessing indecent images, and you have two kids, they could be removed from your home, or you could be, even if there’s no evidence you’ve abused them,’ he explained. CEOP’s success will be trumpeted by the Prime Minister at an international child abuse summit this week. David Cameron will stress the importance of international co-operation, and the introduction of new software which is starting to penetrate paedophiles’ last online refuge – the so-called ‘dark web’.

Mr Cameron will also disclose details of the new Child Abuse Image Database. This will enable police and other investigators to co-ordinate inquiries more closely, and to establish whether a seized image has come to light before.

Mr Gwynne said: ‘Previously, you could have had detectives in Northumbria and Thames Valley working on the same image seized from different individuals, without realising it. That duplication will now be eliminated.’ The NCA has 141 staff devoted to child protection but they work closely with other sections of the Agency, especially those dealing with cyber and organised crime. It co-ordinates closely with Britain’s 45 local police forces, security and intelligence services, sister agencies in 40 countries, and NCA officers stationed abroad.

As well as law enforcement, CEOP includes a strong educational component. It works with teachers and social workers to warn children of the risks of abuse. In the past year, said Mr Gwynne, 3.4 million children have received educational material, and have become aware of the ‘Click CEOP’ button now embedded in many websites – a means for children to contact CEOP staff around the clock. At CEOP’s core, however, is the development of intelligence from the internet.

Mr Gwynne said: ‘It used to be the case that unless a victim came forward and spoke up, we were blind. Now digital images give us a starting point. We are looking for the real world, contact offence. The digital offence gets us through the door.’

Estimates of the proportion of men who both view online images and commit contact abuse vary wildly: between 16 and more than 60 per cent. But is evident there is an enormous overlap. At the same time, Mr Gwynne pointed out, contact offences might well start online. ‘Often a paedophile will groom his victim using the internet, then arrange to meet.’ One critical source of information is NCMEC, the US National Center for Missing and Exploited Children, which sends CEOP about 1,200 tip-offs every month gleaned from the vast web servers based in America.

NCMEC gets its information from automated search tools, which identify known abusive images by their digital fingerprints and paedophile ‘chat’ through keywords.

NCMEC looks for IP (internet protocol) addresses, which will reveal whether a suspected paedophile is based in Britain. Until now, like professional criminals, some paedophiles have tried to conceal their locations by using the ‘dark web’ – software that hides IP addresses by routing internet communications through numerous ‘front’ addresses in many different countries.

Understandably, Mr Gwynne and his colleagues are cagey about the methods they use to penetrate this secrecy. But sources say they are making rapid progress.

An NCA spokeswoman said that while it was proud of the 1,000 arrests this year, the rise ought to be treated with caution as 700 of them had stemmed from a single inquiry called Operation Notarise. It is likely that the number of arrests will fall next year.

But she added: ‘Offenders need to know that the internet is not a safe anonymous space for accessing indecent images. They leave a digital footprint – and we will find it.’