A dangerous paedophile who raped a nine-year-old and sexually assaulted a girl aged seven has been released by one of the country’s top judges who said it would be ‘unlawful’ to keep him locked up.

Jeffrey Charles Goodwyn, 48, had been described as a serious risk to children due to his violent and tendencies.

But despite his release police have also refused to release a photo of him.

Goodwyn already had a conviction for raping a nine-year-old when he was jailed in January 2012 for indecently assaulting a seven-year-old.

On being jailed at Cardiff Crown Court for the two assaults, the judge considered him ‘a very dangerous offender indeed’ and jailed him indefinitely.

But now Goodwyn has been freed after judges ruled the open-ended imprisonment for public protection (IPP) sentence was ‘unlawful’.

IPP sentences had allowed the authorities to keep the most dangerous criminals locked up indefinitely until they have proved they are safe.

However, the Lord Chief Justice Lord Thomas has ruled they can only be passed for offences which happened after April 2005, a year or more after Goodwyn’s offences.

‘Because of his failure to engage with the relevant assistance available to him in prison, he has not begun to address his offending.’

But he continued: ‘Unhappily, despite the danger to the public which this applicant clearly represents, we are in no doubt that the IPP was unlawful.’

Mr Justice Coulson said Goodwyn ‘was someone for whom a period of extended licence was required’.

He said: ‘He was a dangerous offender. An extended licence would provide necessary protection for the public, particularly for children, and assist his rehabilitation.’

The appeal court also stressed ‘as strongly as we can’ that ‘one of the unqualified conditions of any licence on which this applicant is released should be that he attend on all the sex offenders’ programmes and courses that he is directed to by the relevant probation or prison services.’

The judge continued: ‘The applicant has so far failed to attend such courses. If he fails to attend courses that he is directed to attend whilst he is on licence, it is our view that he ought then to be recalled immediately to prison.’

Goodwyn’s sentence would have been quashed a fortnight ago, but Lord Thomas delayed his decision to make sure parole arrangements were in place to protect the public.

That included arranging for hostel accommodation, but Gwent Police have so far refused to release a photo of Goodwyn to help the public identify him.

The Court of Appeal heard how Goodwyn, of no fixed address, admitted twice assaulting the girl when she was seven or eight by putting his hand down her trousers.

His rape conviction bore ‘remarkable similarities’ to the assaults, said the judge.

In prison since 2012, Goodwyn had made ‘no progress whatsoever’, his own lawyers accepted.

He also refused a transfer to open conditions and the Parole Board have described his conduct as ‘unsatisfactory’.

He had threatened staff and been punished for fighting, it said.

Goodwyn has also refused to discuss his sexual offending, meaning he has not been able to start work to address his behaviour, the panel said.

INDEFINITE SENTENCES CAN ONLY BE PASSED FOR OFFENCES AFTER 2005

An indeterminate prison sentence is where a minimum jail term is set before a defendant can be considered for parole.

Goodwyn had received an IPP, an imprisonment for public protection sentence after being convicted of raping a nine-year-old and sexually assaulting a girl aged seven.

IPP sentences had allowed the authorities to keep the most dangerous criminals locked up indefinitely until they have proved they are safe.

However the Court of Appeal ruled that IPP sentences can only be passed for offences, which happened after April 2005.

In Goodwyn’s case, the two offences had occured in October 2001 and May 2004, meaning it was before the Criminal Justice Act 2003 came into force.

Therefore judges ruled that there had been no power to impose an IPP on Goodwyn, which led to his sentence being quashed. 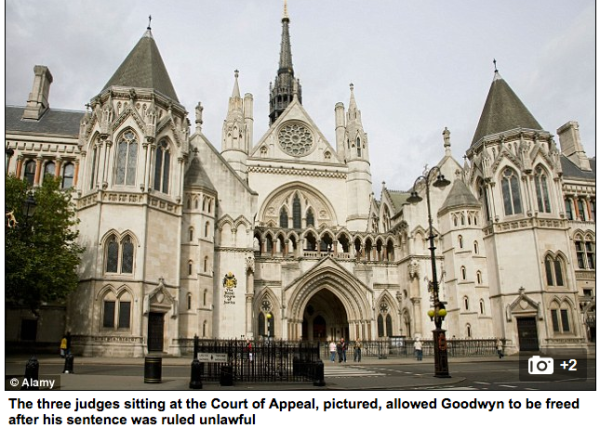 But Lord Thomas said the legal problems surrounding the IPP sentence meant he had no choice but to quash the term.

Goodwyn’s new sentence comprises a three-year custodial stretch, which he has already served, followed by five additional years on licence.

‘With regards to images of convicted sex offenders, the circumstance where our force would release such an image is if that person was wanted.

‘In this case the connection with the Gwent Force area is that this individual committed an historic crime in our area and was subsequently convicted and sentenced for this.

‘At this time we are not the responsible authority for his management.’

One comment on “Dangerous unrepentant paedophile who raped nine-year-old and sexually assaulted girl, 7, is released by judge after just three years because indefinite sentence was unlawful. Then police REFUSE to release his photo”