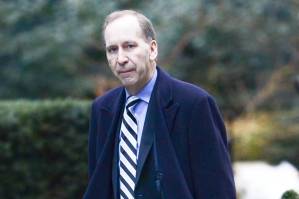 Arrested: Downing Street said Patrick Rock had been involved in

Downing Street faced a storm today over a “cover-up” of the arrest and resignation of one of the Prime Minister’s oldest friends over allegations of child abuse images.

Patrick Rock quit his senior post in Downing Street on February 12, hours before he was arrested and questioned by police.

Mr Rock, 62, was involved in drawing up government policy on internet filters to stop children accessing pornography. His arrest came after No 10 was “made aware of a potential offence relating to child abuse imagery”.

However, even though police then searched No 10 IT equipment, the matter was kept secret until a newspaper investigation forced David Cameron’s office to issue a full statement last night.

Mr Rock is a long-standing friend of the Prime Minister and had been tipped for a peerage. They worked together as advisers to former Home Secretary Michael Howard in the Nineties and Mr Cameron brought Mr Rock into his Downing Street team as deputy head of policy in 2011, with a brief specialising in home affairs issues.

“I have to be careful about what I say about this issue because a criminal investigation is under way.”

He did play an important role at Downing Street and he’s resigned that position.”

Defending the delay in releasing the information, he said: “I don’t think it would be right to pre-emptively brief out a criminal investigation and that’s why we did not do that.

“But as soon as questions were asked, as questions would inevitably be asked, we have given very full and straightforward answers, which is absolutely the right way to answer this.

“I’ve been clear right along and I was told about this issue pretty much as soon as it was discovered and I have been very clear we must handle this in an absolutely correct way and I am satisfied that is what No 10 Downing Street has done.”

Labour said it was extraordinary that such a senior figure could resign in such circumstances without any public announcement.

Labour MP John Mann said: “Yet again we are seeing a lack of transparency from No 10. It is highly inappropriate that a major figure could cease to be responsible for these policy areas without MPs and the public being made aware. We need to be sure there are no policy implications.” Downing Street was first made aware of a potential offence on February 12. Mr Rock resigned later that day and was arrested at his home in west London in the early hours of February 13.

A No 10 spokesman said: “We take any accusation of alleged inappropriate behaviour very seriously. It is inappropriate for us to go into the detail of any grievance or disciplinary cases at No 10.

“Individuals have a right to privacy and confidentiality and to maintain an environment that ensures individuals are not deterred from making complaints. However, we can confirm that an allegation was raised. This was dealt with seriously, immediately and in accordance with Cabinet Office HR policy.”

Mr Rock started working for the Conservatives under Baroness Thatcher and was encouraged by her to stand as an MP, though he never won a seat.

One Tory said he had “rescued” Mr Cameron by giving him a job after he lost his post at the Treasury when Kenneth Clarke took over as Chancellor.

A National Crime Agency spokeswoman declined to comment, stating it did not name suspects on arrest.