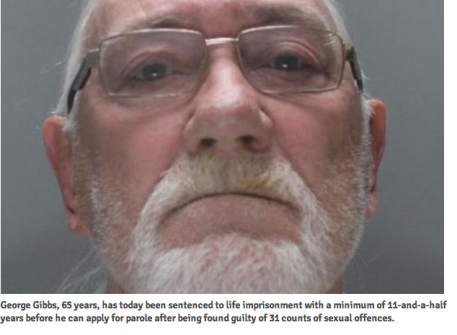 Gibbs, 66, found guilty of fraud after lying in his claim because he knew he had abused children in the 1970s, 80s and 90s

A pervert who won £70,000 compensation from a national newspaper when it called him a paedophile was found guilty of fraud after being jailed for sexual offences.

George Gibbs, 66, successfully sued The Sun after it accused him of being involved in sexual abuse in Thailand in a story on March 17, 2011.

But this summer he was jailed for life after being found guilty of 26 offences against young boys, prompting a fresh investigation into his civil claim.

Liverpool Crown Court heard today how Gibbs lied to Armstrongs solicitors when the Merseyside firm took up his case.

Gibbs said he had no previous convictions and denied he was a paedophile and a check confirmed he was not on the sex offenders register.

However, further enquiries revealed he had been convicted of two offences of gross indecency in 1975.

Gibbs claimed he had forgotten about these crimes, committed in his mid-20s, and Armstrongs said they were not enough to justify what The Sun had written about him.

They went ahead with his claim after he stressed he “was not and never had been a paedophile.”

Yet the whole time Gibbs, of Kremlin Drive, Tuebrook, knew he had raped and abused youngsters in Bournemouth over an eight-year period.

Judge Denis Watson said: “You lied when you claimed firstly that you had no convictions for any sexual offences and also when you said you were not a paedophile.

“You had convictions, historic convictions for gross indecency in 1975, which your claim to have forgotten about is frankly laughable.

“The idea that anyone would forget their first appearance at the Old Bailey is something the jury have rightly rejected.”

The judge said Gibbs, who was on disability benefit, took a calculated risk driven by financial gain.

Sentencing him to three years in prison, he added: “You knew perfectly well what had gone on between 1988 and 1996 with these eight individuals that gave evidence at this court, and you knew perfectly well of the lifestyle you were living in Thailand where you regularly kept the company of young boys.

“This was a deliberate claim for fraud that you persisted in when you were challenged.”

Simon Christie, prosecuting, said Gibbs was sentenced to life with a minimum term of 11 and a half years in July, after confessing to a probation officer following a trial.

But the pony-tailed pervert denied making any admissions to her and told a jury she “misinterpreted” what he said.

The former musician said he intended to appeal against his conviction and claimed his victims and witnesses had lied because they were jealous of his lavish lifestyle.

The court heard he had also not told Armstrongs about a string of convictions for dishonesty and “petty violence”, including assaulting a traffic warden and hitting someone with a sword, which he later claimed solicitors advised him were “spent” – something the firm denied.

Mr Christie said Gibbs was a “persistent liar” who did remember what sexual offences he had committed in the past, adding: “You stood to make thousands of pounds from The Sun newspaper and nothing was going to stand in your way from pursuing your claim.”

The jury, which heard Gibbs was deported from Thailand in 2010, after he was found not guilty of abusing young boys in that country, asked the defendant if he had sought treatment from a doctor for his memory problems.

He said he was seeing a psychologist.

Following his civil claim, The Sun was also forced to issue a retraction and apologise in court.

Gibbs, who heard prosecutors will attempt to claw back the £140,000 he cost the newspaper including court costs in a hearing next year, shouted “wrong again” at the jury as he left the dock.

Judge Watson said: “How dare you address the jury and tell them they were wrong? You are an arrogant man and a man who isn’t going to learn.”

Speaking after the case, Detective Chief Inspector Chris Sephton said he and other officers who investigated Gibbs were delighted with the additional sentence.

He said: “Gibbs has revealed himself to be a deeply devious and manipulative liar as well as being a convicted sex offender. It is my professional belief that he is an incredibly dangerous man and it is satisfying that his attempts to protest his innocence to a jury have failed.

“I would once again like to praise the courage of all the victims that Gibbs has previously been convicted of sexually abusing.

“Reporting such a serious thing to the authorities must have been an incredibly difficult and harrowing thing but it is thanks to their amazing courage that we have been able to put George Gibbs in prison where he cannot harm anyone again.”

4 comments on “Pervert George Gibbs who sued The S*n for calling him a paedophile may have to pay back £70,000 damages”

Pingback: Pervert George Gibbs who sued The S*n for calling him a paedophile may have to pay back £70,000 damages | Alternative News Network