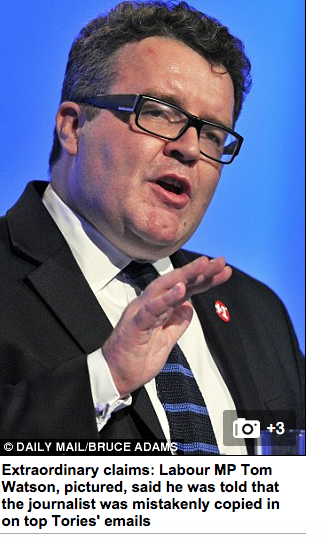 A series of the messages between staff at Conservative Campaign Headquarters were allegedly sent to a national newspaper journalist by accident.

Labour MP Tom Watson made the extraordinary claim in an online blog. He said he was told that the journalist was mistakenly copied in on emails in which Tory officials speculated about which Labour MPs were paedophiles.

The MP claimed the alleged messages meant that senior Conservative officers were either withholding ‘vital intelligence’ from the police or engaging in a ‘smear campaign’ against their opponents.

Conservative Party chairman Grant Shapps replied to Mr Watson saying he had looked into the claims and found no evidence to back them up.

Separately, a senior executive at the newspaper told Mr Watson the emails in fact related to well-established links between senior Labour politicians and notorious campaign group, the Paedophile Information Exchange.