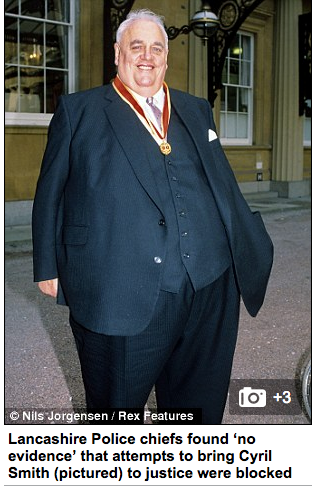 A police force accused of covering up Cyril Smith’s crimes faced claims of a ‘whitewash’ last night after it cleared itself of blame.

Lancashire Police chiefs declared they found ‘absolutely no evidence’ that attempts to bring the paedophile Liberal MP to justice were blocked.

The internal inquiry contradicts claims by retired detectives that key evidence was ‘locked away’ and they were silenced.

He said there is a ‘mountain of evidence’ that Smith was a paedophile and serious failings had allowed him to ‘get away with his crimes for years’.

‘It is very disappointing that Lancashire Police are unable to accept this and are now trying to rubbish the claims of their own former officers,’ Mr Danczuk added.

‘This shows that we haven’t learned lessons from the past and a culture of cover-up and denial still persists.’

The outcome of the inquiry will raise questions over whether it is appropriate for police to investigate themselves in such cases.

Yesterday, the independent police watchdog revealed it is overseeing 14 claims of cover-ups and corruption by Scotland Yard in historic sex abuse cases. The London force will also investigate itself.

MPs want Prime Minister David Cameron to guarantee police whistleblowers will not be prosecuted under the Official Secrets Act if they come forward.

They said ex-officers, public officials and spies may hold vital information that could open up suspected powerful networks that protected abusers.

Home Secretary Theresa May yesterday insisted spies and police will not face prosecution under the Official Secrets Act if they give evidence to the police or the Home Office’s abuse inquiry. 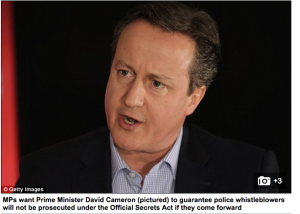 She has invited Justice Goddard, who is leading the inquiry, to seek confirmation from the Attorney General that no charges would be brought.

However, when pressed by the Home Affairs Committee, Mrs May declined to extend the protection to whistleblowers who speak to the media or elsewhere in public.

Police suspect Smith’s activities as a paedophile could be key to unlocking claims of an Establishment child sex ring. The politician abused children at care homes and schools in Rochdale and Manchester.

He was also seen at the notorious Elm Guest House, in Barnes, south-west London, where appalling crimes are said to have taken place involving young boys.

Jack Tasker, a former Lancashire detective, who led one of three investigations into Smith, said it was stopped because it could have led to the ‘fall of the Government’.

He claims his 1969 inquiry into abuse at Cambridge House care home was stalled by Special Branch officers who confiscated his notes and ordered him to forget the matter.

‘We were under the impression then that they’d take the investigation over … but I never heard any more about it,’ he told Sky News. He added: ‘Other people were rather worried that if Cyril Smith went before a court, he would open his mouth.’

Another ex-officer, Tony Robinson, said he had advised Lancashire Police to look at the case file he found locked in a Special Branch safe in the 1970s.

‘It doesn’t surprise me at all that they’ve dismissed the claims,’ he said. ‘It’s an easy way out.’

A Lancashire Police spokesman said it had referred the matter to the Independent Police Complaints Commission which ‘determined that a local investigation be carried out’.

He added that the Constabulary’s Professional Standards Department found ‘absolutely no evidence to substantiate any of the claims’.