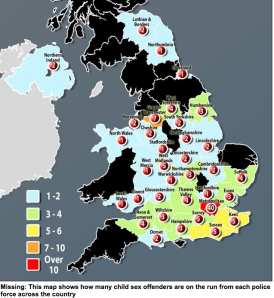 Police have lost track of almost 140 paedophiles, sparking fears many may have left the country, it has been revealed.

Government figures show a total of 137 child sex offenders have disappeared after signing the sex offenders’ register, which requires them to inform police of their whereabouts or any changes to their details.

The shock figures show the Metropolitan Police has lost by far the most paedophiles, with 40 on the run from the authorities in London.

The force with the second highest number on the run is Greater Manchester, which has lost seven, while Sussex has lost six, according to The Mirror.

The West Midlands, Derbyshire, Kent and Lancashire all have five child sex offenders they are looking for.

Chapman posed as a teenager on the internet to lure the trainee nurse to her death. He was jailed for life in 2010.
Meanwhile, another example of an offender who disappeared was serial rapist Peter Chapman, who was off the police radar for seven months after his monitoring level was downgraded by the authorities.

He went on to rape and murder 17-year-old trainee nurse Ashleigh Hall after contacting her on Facebook.

On the run: Stephen Clare has been off the radar since 2002. He was jailed for sexually assaulting a five-year-old girl and taking indecent photographs in the 1990s

Children’s charity the NSPCC has called for a system which makes it impossible for sex offenders to ‘vanish’.

Jon Brown, head of sexual abuse programmes at the NSPCC, said: ‘This is an extremely worrying situation as anyone who has committed a sex offence against a child must be considered an on-going risk.

‘Keeping track of their movements has to be a priority for the authorities because we can’t gamble with the safety of vulnerable children.

‘We really must have a system where no one with a record of this kind of offence can just vanish. It’s not acceptable and is a serious cause for concern.’

A Home Office spokesman said: ‘We have some of the toughest measures in the world to manage violent and sexual offenders.

‘We are determined to do everything we can to protect the public which is why last year we introduced new measures to strengthen and extend checks on those subject to the Sex Offenders’ Register.

‘Individuals who breach their conditions are subject to tough penalties and the police and other local agencies should robustly enforce the tools and powers available to them.’

One comment on “How many convicted paedophiles have police lost track of in your area? Map shows where 137 have gone missing”