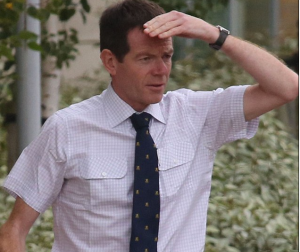 Frere was arrested in November last year after police raided his former home in Dorset, finding pornographic videos and indecent pictures on his computer, and children’s clothing in a bedroom drawer

Bartle Frere allegedly arranged to meet up with boys in Chennai, India

A British Airways pilot accused of sex offences against underage boys has denied he is a paedophile, a court heard.

Bartle Frere, 50, is said to have used his job with British Airways to meet boys in India and lavish them with money and gifts.

The bachelor, of Abingdon, Oxfordshire, is also accused of a string of sex charges against two boys in the UK, who it is alleged he abused after paying them to do odd jobs around his house.

Giving evidence for the first time in his trial at Bournemouth Crown Court, Frere described himself as ‘asexual’ – saying he had no interest in sex at all with either men or women.

‘I’ve never really had any preferences one way or the other,’ Frere told jurors.

‘I’ve always had a low sex drive. It’s never something I have required or desired in my life.

‘I don’t find myself being sexually attracted to anyone or anything.’

David Fisher QC, defending Frere, asked the defendant whether he was interested sexually in young boys.

Frere replied: ‘No, no doubt at all. Sexual attraction would give arousal and I have never had any arousal through contact with boys.’

‘I find their company stimulating. I enjoy the banter you can have with them,’ Frere told the jury.

‘You can get laughs quite easily with youngsters and with adults you have to work much harder to get laughs. The energy they produce is stimulating.

‘I also find young boys aesthetically pleasing to look at but I don’t find them sexually attractive in any way.

Frere added: ‘I don’t automatically avert my gaze if a youngster walks in the room – it’s difficult to pin it down.’

But Frere told the court he felt ‘guilty’ for not providing his parents with grandchildren and having to come home after work to an empty house.

‘In some ways I regret not having a family,’ he said.

The court heard that Frere worked for British Airways for 25 years – rising to the rank of captain – until leaving in February this year.

He had gained his private pilot’s licence as a teenager and later qualified as a commercial pilot when he joined British Airways in 1989.

Frere was arrested in November last year after police raided his former home in Dorset, finding pornographic videos and indecent pictures on his computer, and children’s clothing in a bedroom drawer.

The defendant told the court that he found India a fascinating place and would regularly take monthly British Airways flights to Chennai, spending rest days visiting the nearby fishing village of Nochi Kuppam.

He explained that he became friends with village families because of his ‘passion’ for photography – taking pictures of both children and adults.

Frere said that he bought them clothes and gifts, including iPhones and sports equipment – sometimes spending up to £200 on them during a trip.

‘They were asking for money, which I didn’t like giving,’ he said.

‘For the cost of me eating in the crew hotel I found I could feed about a dozen children in a local restaurant.

‘If I was there for several days I might spend a couple of hundred pounds, maybe less. I am in a position of being very well paid and don’t have to support a family – it’s money I can afford.’

The jury was also shown a film Frere had made during one of his trips to Nochi Kuppam of a boat trip he took with local boys and adults.

The video, which had the Bollywood soundtrack ‘Crazy Kiya Re’ accompanying it, showed boys jumping from the boat into the sea and playing with a body board Frere had brought from the UK for them.

The defendant told the court that he found India a fascinating place and would regularly take monthly British Airways flights to Chennai. Pictured, the city’s Kapaleeswarer Siva Temple

Frere denies all 25 charges against him as his trial at Bournemouth Crown Court, pictured, continues

He is accused of five offences of arranging or facilitating the commission of a child sex offence, which relates to his alleged conduct with boys in India.

Against the first alleged victim in the UK, he is charged with five counts of indecent assault; one count of indecency with a child and two charges of serious sexual assault.

Frere faces accusations against a second UK victim. He is charged with one count of sexual activity with a child and one charge of attempting to record a person doing a private act.