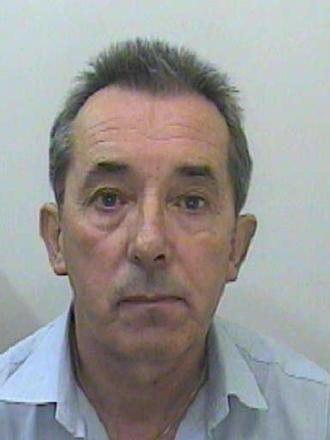 A Cornish bard from Redruth is facing years in prison after being found guilty of child sex abuse.

Les Merton, a 70-year-old from Redruth has been jailed for 13 years after being found guilty of a raft of offences against girls as young as seven.

The offences happened between 1983 and 2004, with Merton guilty of 16 indecent assault and four counts of indecency with a child.

Called a paedophile with a “dark, sinister and depraved side” to his personality by Judge Christopher Clark, Merton, was also made the subject of a sexual offences order.

In 2005 Merton accepted a police caution for entering his credit card details into a website hosting indecent images of children, but had claimed that this was a mistake which happened whilst carrying out research into the Russian mystic, Rasputin.

In 2002 he founded Poetry Cornwall / Bardhonyaeth Kernow. In the same year his poem “Gud News” won the Cornish Gorsedd, and in 2004 he was made a bard of that organisation for his services to Cornish literature

His guide to the Cornish dialect entitled Oall Rite Me Ansum?: a salute to Cornish Dialect, was published in 2003

This is West Cornwall

From:Home Office and The Rt Hon Theresa May MPDelivered on:21 October 2014First published:21 October 2014Part of:Reducing and preventing crime and Crime and policing

Secretary of State for the Home Department (Theresa May):

Further to my statement to the House on 7 July and my written ministerial statements of 9 July and 5 September 2014, I am pleased to announce that I have appointed the panel members to the independent inquiry panel of experts, which will consider whether public bodies – and other, non-state, institutions – have taken seriously their duty of care to protect children from sexual abuse.

I am confident that this panel, under the chairmanship of Fiona Woolf CBE, will carry out a robust and thorough inquiry, and will challenge individuals and institutions without fear or favour, in order to consider this important issue, to learn the relevant lessons, and to prevent it happening again. The panel represents a diverse range of experience, which includes social care, academia, law enforcement, health, media, the voluntary sector and those with experience of child sexual abuse.

The terms of reference have been drafted to ensure that this strong and balanced panel of independent experts can have full access to all the material it seeks, unless there is a statutory impediment to it doing so. The panel will consider matters from 1970 to the present, although this can be extended if evidence is provided that supports this, and will decide how and where to focus its efforts, in order to complete its work and make recommendations within a reasonable timeframe. The terms of reference have been finalised and a copy will be placed in the House Library. The panel will provide an update to Parliament before May next year.

Each of the panel members has written to me setting out in full any issues which might be seen to cast doubt on their impartiality. Those letters are published in full on the inquiry’s website. I am confident that they will carry out their duties to the highest standards of impartiality and integrity.

Fiona Woolf has a long and distinguished career throughout which she has demonstrated the highest standards of integrity. I am confident that she will lead the work of the panel with authority, and that under her leadership the panel will get to the truth of these issues. They will do so on behalf of victims past and present to ensure that the sexual abuse of children is never again a hidden crime, and that past failings are acknowledged, and recommendations made for further improvements to current arrangements in the light of the panel’s findings. I wish the panel every success in its important work.

A Cambridge-based charity tasked with monitoring child sexual abuse content online has reported a huge spike in the number of reports it is  receiving from the public.

The Internet Watch Foundation said reports of child sexual abuse content online are 34 per cent up on last year’s figures for the same period.

The charity also recorded a 25 per cent rise in the number of reported  instances of abuse featuring children under the age of 10, and a 27 per cent increase in abuse classified as “the worst of the worst”.

She said: “There is an incredible  increase and we have noticed there has been an uplift in the number of reports since October last year.

“We have put this down to there  being a lot of media attention on  historical child sexual abuse cases.

“The Jimmy Savile case was in October last year, and since then there have been a number of people arrested in relation to historical child sexual abuse.”

Miss Lowther added: “People are more aware and hopefully what it also shows is that people are willing to take responsibility and, rather than seeing this and then shutting down their computer, they are realising they should report it.”

The IWF’s job is to analyse criminal online content that is sent to them by the police, public or from other internet hotlines from abroad, and work to have it removed as quickly as possible.

Its achievements as one of the most successful organisations of its kind globally were recognised in a recent speech by David Cameron.

Miss Lowther said: “We are delighted that he supports the IWF. It is incredibly important that we have that support.”

In June the charity was invited to a summit in London by Maria Miller, Secretary of State for Sport, Media and Culture, where the problem of child sexual abuse content was discussed.

And Google recently made a £1 million donation to the company, to be spread over the next four years, which will enable them to hire as many as five more analysts.

A CHEPSTOW man faces a jail sentence after being convicted of the sexual abuse of a young boy in Gloucestershire more than 35 years ago.

A jury at Gloucester Crown Court found David Aston, 52, of Alice Crescent, guilty of eight charges of indecency and gross indecency with a child under the age of 16. Some the offences were committed when Aston was aged under 16.

The court had been told by the victim, now in his forties, how he was forced to commit, and subjected to, sexual acts.

He was aged five when the abuse started. It ended when he moved away.

Aston told the victim not to tell anyone or he’d kill him. “I was terrified,” he said.

The man said his life had been adversely affected by the abuse and he had ended up on the streets of London selling the Big Issue, was confused about his sexuality and felt like a misfit.

“I did not know where I fitted in,” he said.

He came forward as he had been unable to suppress his feelings about what had happened any further and had been encouraged by his partner to seek help.

During cross-examination, when Jason Coulter, defending, suggested the abuse had not taken place and he’d made up the allegations, he said: “I’m saying you’re wrong.”

Aston had denied the allegations, claiming the man had invented the claims.

“It never ever happened,” he told police after he had been arrested when the allegations came to light.

Judge William Hart deferred sentencing Aston until August 14 and said he faced an immediate custodial sentence. He would also be required to meet the requirements of the Sexual Offences Act.

Asim A Sheikh and Jenny Bulbulia at the Voice Of A Child conference in the Ashling Hotel, Dublin.

“Some serious cultural change in a number of agencies” is needed to improve the handling of child sexual abuse cases in Ireland, a conference on childcare and the law has been told.

Barrister Úna Ní Raifeartaigh SC, who specialises in criminal law, said until changes are made “we are all complicit in a system which is itself capable of perpetrating further abuses on children”.

She said she had heard lawyers saying they would not put their own children through it. This was a terrible indictment of the system and numerous practical steps needed to be taken to improve the system.

Aspects of the system potentially harmful to children included “delays of several months at a time, while the file sits idle on someone’s desk”. These delays had the potential to “affect the quality of the evidence in a manner that does not apply in cases involving adult witnesses”, she said, and it was also better for a child to have the trial quickly so that he or she could move on with their lives.

She emphasised the importance of initial statements taken from children who make an allegation of child sexual abuse and said it required “unusual skills and training”.

She acknowledged some gardaí in recent years had received training to make them specialist interviewers, but it was too early to assess if the training was having the desired effect. Gardaí also needed to carry out a “thorough investigation” of a case and explore any possibility of corroborative evidence.

Ms Ní Raifeartaigh said the norm in child sexual abuse cases often seemed to be simply to take the child’s statement, statements from key relatives, to interview the accused some months later, and “leave it at that”. Issues may have been raised that suggest avenues of further inquiry “yet there was no further investigation”. She also questioned why it took several months from the taking of a child’s statement before an accused is interviewed.

“Child abuse cases should be treated as urgent . . . the casual loss of a few months is not defensible.”

Ms Ní Raifeartaigh also criticised delays at the office of the Director of Public Prosecutions and in the courts system and said there was a “serious need for a different system for fixing trial dates for child sexual abuse cases”, perhaps with a specialist list.

A time should also be scheduled for children giving evidence in court instead of having them “hanging around for a number of days”.

Also presenting a paper at the weekend conference, which was organised by La Touche Training and chaired by Mrs Justice Catherine McGuinness, consultant psychologist Dr Rosaleen McElvaney said the adversarial nature of the criminal justice process was unsuited to dealing with sensitive issues like child sexual abuse.

Dr McElvaney said despite some attempts at co-operation between the child protection system and the police services in Ireland, joint interviewing continued to be an aspiration rather than a reality.