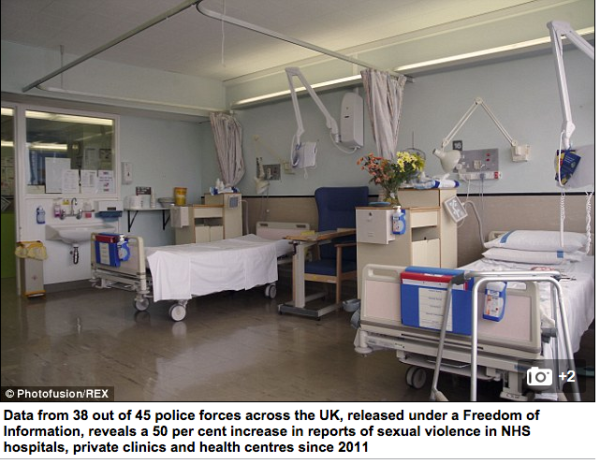 Police figures reveal a huge rise in the number of sexual abuse reports received from hospital patients, with 1,600 attacks recorded in the last three years.

Data from 38 out of 45 police forces across the UK reveals a 50 per cent increase in reports of sexual violence in NHS hospitals, private clinics and health centres since 2011.

The figures, released following a Freedom of Information request by the Guardian, show there were a total of 1,615 alleged attacks, which included 157 reports of rape. A small number reportedly relate to historic assaults which occurred before 2011.

Data from Metropolitan Police showed the force received 17 reports of rapes and 124 reports of other sexual offences, accounting for 20 per cent of all reports, with mental health patients being particularly vulnerable.

One victim, a mental health patient, described psychiatric hospitals as a ‘playground for predators’, and said she was raped up to 60 times by a member of staff.

The woman, who was groomed with gifts from the senior staff member, said she only built up the courage to speak out about the abuse after she was released from Little Brook Hospital in Dartford, Kent.

Remaining anonymous, she told the BBC earlier this year how she was admitted to the hospital after a breakdown.

She said: ‘At times I was on a very heavy amount of Valium, not to where I was unconscious, but the sedative combined with my already defeated self, I was like putty. He would pull the covers back, do what he had to do and leave, all very quickly. I didn’t move.’

She said she couldn’t ‘believe how it could have been so frequent and not picked up on.’ She eventually received £100,000 compensation and her attacker received a suspended jail sentence.

At the time, Kent and Medway NHS Trust said it was unable to comment because the offences occurred under the previous regime.

Doctor Myles Bradbury, 41, (pictured) was jailed for 22 years earlier this month after sexually abusing desperately ill boys in his care at a specialist unit

Another victim told how she was groomed by her mental health support officer for five months, but he resigned before a police investigation concluded and authorities were unable to take action against him.

The court heard how the disgraced doctor targeted the boys – all of whom were ‘really poorly’ and vulnerable – in his private consulting room.

He would tell their parents they should leave the room in case their children got embarrassed, before sexually touching them for his own gratification and telling them it was a ‘legitimate examination’.

Bradbury, from Herringswell, near Bury St Edmunds in Suffolk, was suspended from Addenbrooke’s Hospital in Cambridge last November after a victim’s parents raised concerns with staff.

He was jailed for 22 years at Cambridge Crown Court earlier this month, after pleading guilty to 25 offences against boys aged 10 to 16, including sexual assault, voyeurism and possessing more than 16,000 indecent images.

Luciana Berger, shadow minister for public health, said the new figures were worrying and demanded that ministers order an immediate review of security.

She told the Guardian‘s Martin Williams: ‘A zero-tolerance approach to sexual abuse must be pursued in the NHS.

‘All victims should feel safe to come forward and every incident properly dealt with by the police, courts and health service, to ensure every perpetrator is brought to justice.’

Mind, a mental health charity, said it was ‘completely unacceptable that sexual abuse was so prevalent within mental health units’.

In a statement, Nat Miles, senior policy and campaigns officer, said: ‘Many people told us they are often seen as vulnerable and therefore an easy target by perpetrators, and are more easily discredited and less likely to be taken seriously if they report a crime.

‘Too often, crimes on wards are dealt with internally and not reported to police. It’s vital that frontline staff are adequately trained, so crimes are taken seriously, and dealt with quickly and appropriately.’

An NHS England spokesman said: ‘It is of course essential that both NHS and independent hospitals do everything to ensure that patients are safe and feel safe in their premises, and where concerns arise the police must be able to bring to bear the full force of the law.’

Rules which bar sex offenders from working with children are ‘unfair’ and even convicted paedophiles should have the right to adopt, a leading legal academic has said.

Helen Reece, a reader in law at the London School of Economics, called on Theresa May, the Home Secretary, to relax rules which automatically ban sex offenders from caring for children, saying that this could breach their human rights.

In an article in the respected Child and Family Law Quarterly, Miss Reece suggested that reoffending rates were not high among sex criminals, adding: “despite growing public concern over paedophilia, the numbers of child sex murders are very low.”

A review is currently ongoing into the Vetting and Barring Scheme, introduced following the 2002 Soham murders, amid concerns by ministers that it is too heavy handed.

As well as banning certain offenders, the law currently requires adults coming into regular contact with children other than their own to be screened.

Mrs May ordered the review amid concerns about the vetting of ordinary volunteers such as parents who drive children to football practice and church flower arrangers.

In her article, Miss Reece suggested that the review should also introduce an assumption that sex offenders including child abusers posed no threat once they had served their sentence.

She said: “There is no reason why all sex offenders should not be considered as potentially suitable to adopt or foster children, or work with them.

“The Vetting and Barring Scheme and other legislative measures single out sex offenders for unfair special treatment and they destroy the principle that a prisoner pays his or her debt by serving their sentence before re-entering society on equal terms.”

Individuals are placed on the “Barred List” and banned from working with youngsters or vulnerable adults if they are convicted of a sexual or violent offence, or one involving the mistreatment of a child.

Miss Reece criticised the rules for leading all sex offenders to be “tarred with the same brush,” saying that while “careful screening” was “important,” the issuing of a “blanket ban” violated the rights of criminals who wanted to adopt or work with young people.

She highlighted the case of a grandfather with a conviction for having sex with a 15-year-old dating back to when he was 29, who was refused permission to adopt his own grandchildren.

The ban could contravene the principle of non-discrimination enshrined in the European Convention on Human Rights, and may leave the Government open to legal challenge, Miss Reece warned.

Comparing sex offenders to cohabiting couples, she suggested that if blanket bans on the former were allowed, it would make sense to bar those who were not married from adopting because parents who were wed were less likely to separate with harmful consequences for the child.

She also highlighted the case of four nurses who recently won a High Court challenge after being barred for having convictions. One of the nurses was banned over a police caution for leaving her own children alone in their home.

“Rather than presuming that everyone is a potential risk to children and must therefore be vetted, any vetting or barring should be based on very strong evidence that they are a risk,” the academic said.

“This would represent a victory not only for human rights but for protecting the best interests of children.”

Miss Reece has been at the LSE since September 2009, having previously worked at the University of London, University College London and Birkbeck College.

A trained barrister, she has an MSc in logic and scientific method, and was awarded the Socio-Legal Studies Association Book Prize in 2004 for a monograph called “Divorcing Responsibly.

She has also argued that rape victims should no longer be granted anonymity.

A Home Office spokesman said: “It is safe to say that the vetting review will not be considering allowing paedophiles to adopt. It wouldn’t exactly go down well with the public.

“The review is very much focused on seeing whether the rules have gone too far in stopping normal volunteering with children, while continuing to carry out criminal records checks on people in sensitive posts, such as in the NHS.”